A step towards a Social Policy for Amsterdam cycling datacommons 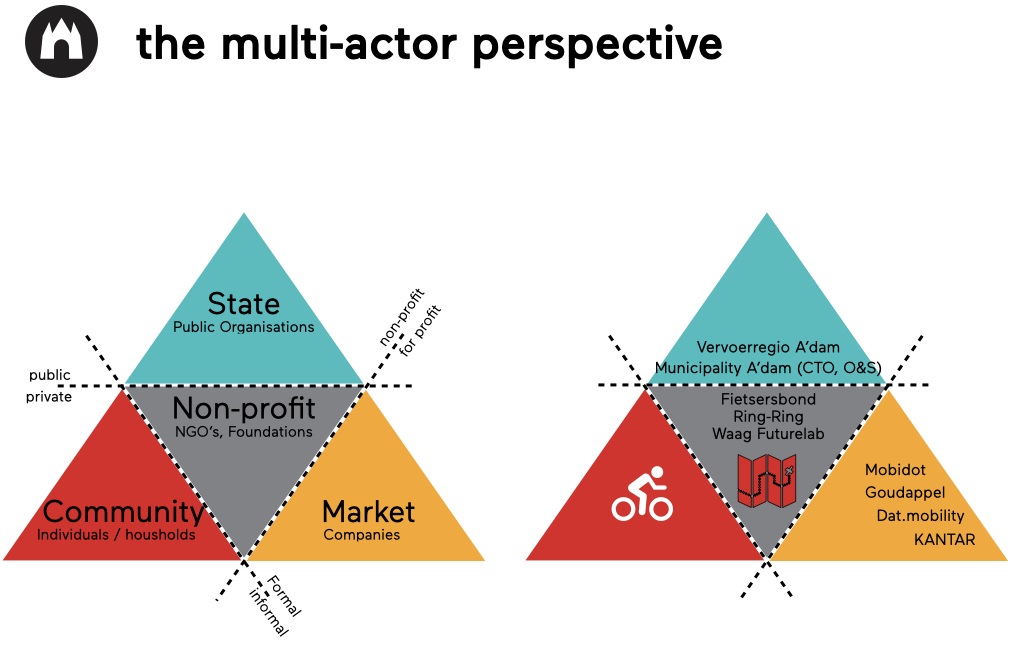 A step towards a Social Policy for Amsterdam cycling datacommons

As Urbanite is entering its final phase, the Municipality of Amsterdam and Waag organised the third and final Amsterdam Social Policy Lab (SoPoLab). We discussed the datacommons pilot in Amsterdam and its relevance for the municipality. This SoPoLab took place on the 5th of July, and was the culmination of several activities, such as preparatory interviews and contextual conversations with civil servants and mobility experts. Nine people participated in the SoPoLab, including four civil servants from the Municipality of Amsterdam and five citizens and experts with experience and knowledge on data, cycling data and cycling in Amsterdam and with an interest in data practices and datacommons.

A datacommons approach does not only entail developing a common pool of data that participants of the datacommons can access or use. It also entails opening up tools for the city and its citizens to gain insight from the data that is produced by us all together. This includes developing software tools for visualising and understanding data, making those software tools and data (re)usable, but also development of methods to improve data and empowering citizens in use of data for their benefit. We therefore discussed the Municipality of Amsterdam’s current practices around data collection and analysis with citizens and civil society, how they relate to a datacommons approach and how elements of a datacommons approach could be embedded in municipal data practices. In this blog, we will summarise the main outcomes of this discussion.

Besides four civil servants from the Municipality of Amsterdam, we also had participants who do not work for the municipality. Although this added perspectives from citizens, academics, and professionals with expertise in data and cycling, it also resulted in the discussion broadening while we envisaged a more in-depth dialogue. The main topics discussed were inspiration about datacommons approach, a presentation of mobility data ecosystem mapping, and defining the relevance of datacommons for policy makers and analysts of municipality.

The dialogues and responses to the presentations during the workshop resulted in outcomes that can be addressed in further development of the datacommons experiments within the context of the Amsterdam Urbanite pilot.

Outcomes
The Amsterdam use case focusses on using a datacommons approach to analyse cycling habits in Amsterdam North through GPS tracing. This would then be used by the Municipality to make cycling in Amsterdam North safer and more enjoyable through defining routes for different types of cyclists. Although it was presented that the Amsterdam pilot should increase the happiness of cyclists in Amsterdam North, it was not clear for participants how the collection of GPS traces could contribute to this goal. The citizens were critical about the need to continuously track individuals’ location data and expressed the concern that by allowing an app to use location services, other parties and apps would indirectly also gain access to their location data. The workshop host of the Municipality of Amsterdam explained that the GPS tracing was necessary to gain more insights – for cyclists themselves – into the citizens’ cycling habits. The cyclists could then use these insights to choose routes suited for faster or slower cyclists. However, the path from data collection to insights needs to become clearer, especially considering the privacy concerns.

Moreover, the participants discussed how the democratic level of the datacommons pilot can be improved – for example by ensuring that the sample of citizen scientists is representative for the population. Another inclusivity issue is the question how we can include people without smartphones in the pilot.

Whereas it was difficult to gain insight in the processes for data collaboration between the municipality and civil society and citizens, it was easier to understand the relation between the municipality and private parties working on collecting data and insights from citizens. The question rises whether citizens and municipality would benefit more from direct involvement and data exchange between citizens and the city. Can public money be saved by developing dashboards and software tools as part of an open-source ecosystem? The open-source software can then be made available to other municipalities and citizens. Commercial companies did stress the need for maintenance, changing compatibilities and helpdesks, when switching towards open-source software.

The Cycling Department of the Municipality of Amsterdam is involved in citizen science projects. Gaining more insight into the municipal way of working with citizen data collection would be valuable for the Urbanite Amsterdam pilot, as working together with citizens on data collection and insights from data is a central goal.

Moreover, a tool for data ecosystem mapping would help the pilot cities in Urbanite to visualise the data ecosystem of their municipalities, specifically related to mobility. This could give insight into how and where a datacommons approach could improve the knowledge and information balance between government, market and communities.