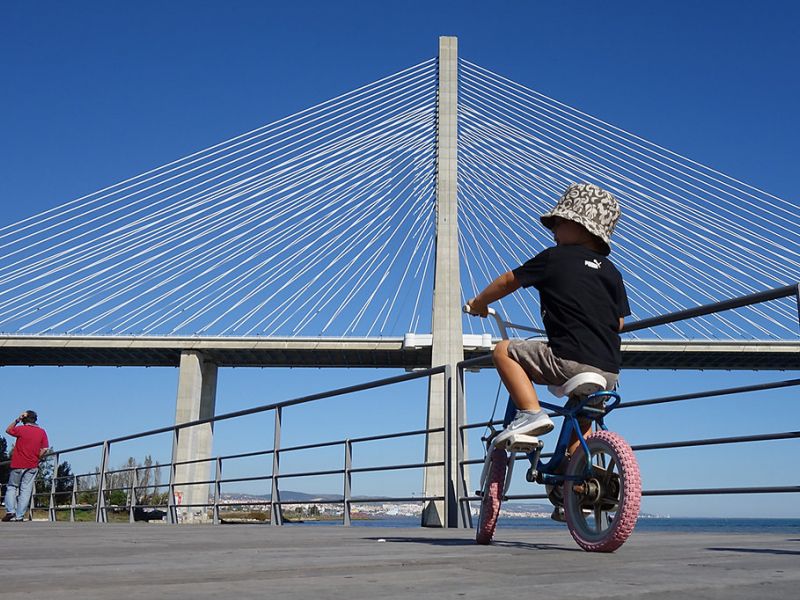 In the search for more sustainable and environmentally friendly urban life and mobility, research increasingly points towards the bicycle. It is seen as the panacea to a healthier lifestyle, with less carbon emissions and less financial burden than its counterparts; it is being adopted and hailed by more cities and their planners, like Amsterdam, Copenhagen, Paris and also on a smaller scale, like Trikala in Greece. All the more, during the times of physical distancing, where the idea of the tram and the bus only causes fret and horror, the bike is presented as the smartest, easiest and most ecological alternative. In an era, then, when we not only have to think about our carbon footprint and the environment but also about our protection from the transmission of a disease that has disrupted our lives to their very core, why do some people still oppose cycling?

Enter the case of Lisbon, as described in a recent Urbanite publication about mobility and disruptions. During the city’s lockdown at the beginning of the pandemic in 2020, new pop-up bike lanes appeared across its streets. The new measure acted as a means of facilitating mobility but also realising the urban plans that were promised when Lisbon was voted Green Capital 2020. And since there can’t be bike lanes without bikes or the respective bike culture, the municipality additionally offered subsidies to each citizen to acquire their own, personal bike, regular, cargo or e-bike, in addition to cycling courses.

Regarding it from an outsider’s perspective – as a non-Lisbon citizen – what the city accomplished in such a small time period is what many mobility and urban planners have been struggling to achieve for years. Bike culture education, personal investment in biking, and the shift in the streets from car-centric to bike- and pedestrian-centric. Overall, the Lisbon programme supports a healthy and eco-friendly lifestyle without the concerns of a bike-sharing operation, that could majorly fail as happened in some cities in China.

From the insider’s perspective, however, there is not such a consensus regarding the bike programme. Anti-bike lanes neighbourhood groups cropped up on social media, protesting and disapproving of the new mobility scheme. Tension soon escalated from online posts to vandalising some bike lanes, with graffiti or planted spikes. What is there to not like about biking? In large part, the bike lanes are seen as an over-investment with trivial output; millions down the drain for a few bikes, based on studies that according to the opposing party, are not holistic and well-substantiated. Consequently, in a mobility plan that is mostly concentrated on cars, the reduction of the car lanes causes frustration to the ambulance, police, and fire department traffic. Similar concerns may apply  to the individual. When you are trained to have a binary presence on the road, either a pedestrian or a driver, switching to a bike clashes with or frustrates one’s internalised mobility education. The cars or motorcycles don’t know how to react to the bike’s existence and vice versa. And that could be as dangerous as it sounds.

Not all Lisboans share the same bike-hostility. After an interview with Nuno, a Lisbon citizen and a resident of one of the most bike-opposing neighbourhoods, the idea of political beliefs shadowing the objective regarding the bikes starts to appear. Is it really the bike that is detested, or the actions of the opposite political group, especially during a period that political polarisation is acute across Europe? “There is going to be opposition against everything.” Nuno says and laughs, opposition not strictly because of the inconvenience or injustice of a new policy, but because it comes from the other party.

“There is going to be opposition against everything.”

An intriguing dilemma. On the one hand, the expression of the citizen’s opposition to a measure imposed by the municipality should be taken into account in a democratic society, especially under the light of participation and co-creation. On the other hand, dismissing the bike-lanes is a step back in the ecological transformation that has been required for decades. Habits are the first to be broken, if we aim for real change. The bike mobility bastions, like Amsterdam and Copenhagen, also had to go through the uncomfortable period of transition and convince the citizens of its worth.

Nuno describes his everyday mobility. He goes around on his new, government-funded, foldable e-bike. He encouraged his friends to get one for all of them to enjoy the bike rides. Whenever he needs to work and carry his heavy equipment for his work in film, he calls an Uber, or when he needs to leave Lisbon, he keeps his bike to the boot of his car to be able to move around wherever he is. He chooses between his bike, the shared bikes, driver-on-demand options, the subway, the tram and in the end he explains how this is the way to go. ‘Multimodal’, as they say. Through different means, approachable and reachable, limiting the car use could be realised. And in cultures where owning a car is understood as a ritual passage to adulthood, there should first be the presentation of the alternatives, rather than going car-cold-turkey.

Opposition to large cultural and infrastructural shifts towards biking often tends towards a similar rebuttal: we are not Amsterdam. And indeed, every city, every culture, every citizen is different and there can’t be only one solution. In a project like Urbanite, with partners in cities that cover the acres of Europe, these local contextual differences become clear. Progress is not about applying only one solution, or hushing down the opposition, but mostly reminding the policy makers and the citizens about the variety of alternatives. In the case of Lisbon, the subway, the tram, the shared bikes were already there; therefore, could the Lisbon situation be “soothed” by further communication, or by enabling the discussion amongst the municipality and citizens?

Urbanite can learn from the successes, nuances, and challenges faced in Lisbon. In co-creation sessions, Urbanite, like Lisbon, will encounter resistance, multiple perspectives, and the tendency for binaries to emerge out of deliberation. Urbanite partners will likewise encounter the phenomenon that while we can share knowledge and learn from other cities, no programme or solution will translate directly to another context. These tensions are where co-creation comes into play – not to convince the public of something, but to understand the public, address the needs of a given city, and have a shared space where people can be brought out of binary echo chambers to work towards shared solutions.