In this third session “Policy: translating insights into practical policy and requirements” which was held between May and the beginning of July 2022, the initial objective was to define concrete actions from the second SoPoLab that could become policies in the short or medium term. In addition, within this initial plan, it is also planned for the next SoPoLab to hold a session at European level to share the results of these specific actions and to reflect on the extent to which they can have an implication at European level.

The main aim of this SoPoLab in Amsterdam was twofold. First, present what has been learned about a data commons approach for mobility data to relevant stakeholders from the municipality. And second, have an open dialogue with municipal stakego0lfretd about relevance and feasibility of a data commons practices in the right municipal contexts. Due to the audience present, goals achieved departed sightly from the intended purpose. 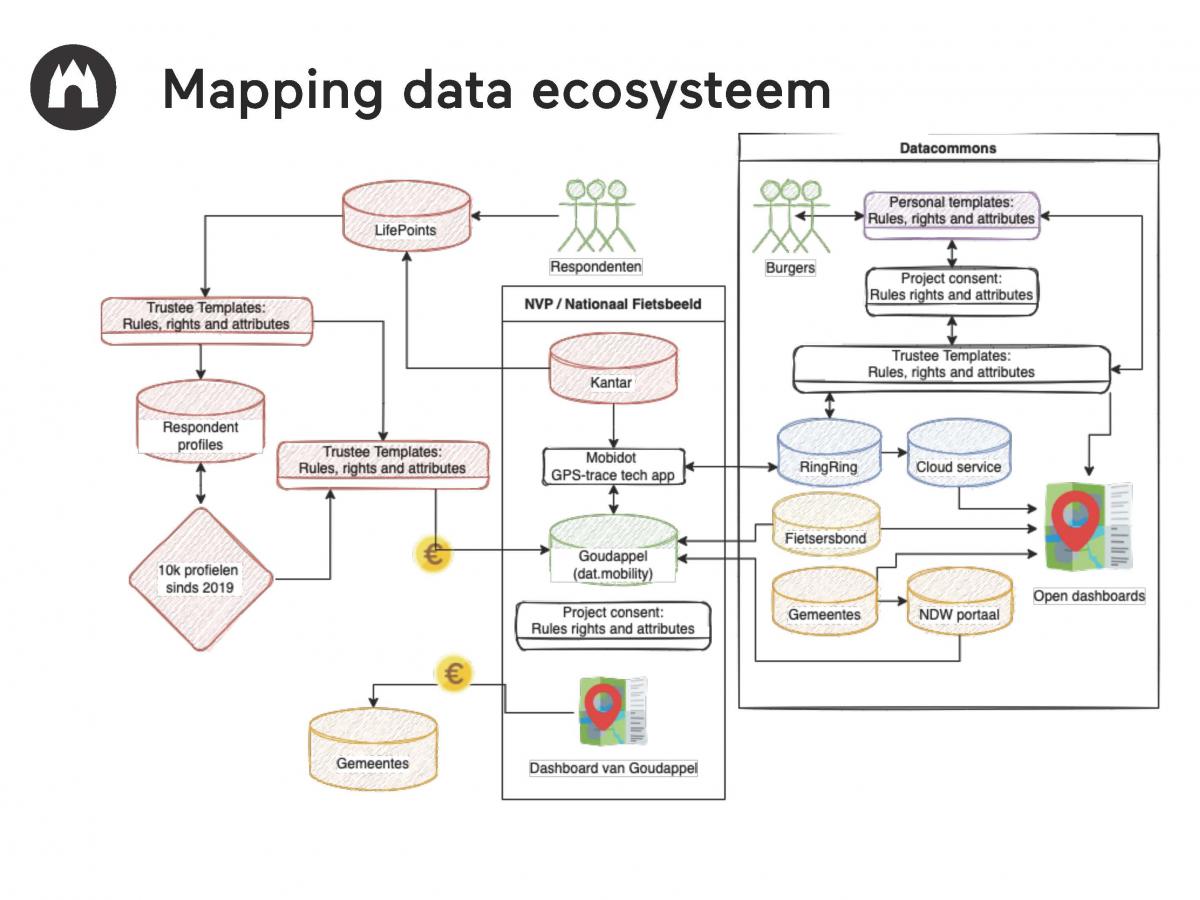 The dialogues and responses to the presentations during the workshop resulted in different outcomes, for example, having a mixed audience resulted in a broader discussion, at times lacking depth in discussing governmental structures and processes. Sending invitations to a wide audience of civil servants that got introduced and engaged in the subject. Unclarity of data-use cases, participants were not sure about the vision and aim of Urbanite and of the data commons pilot within Urbanite. Legitimizing data collection, the need for very clear and specific goals for collection on GPS traces about cycling trips. Ownership, relationship between the data commons initiative and the municipality, regarding ownership, rules and rights. Representation issues, possibilities citizen’s engagement in a data common. Time and engagement problematized in terms of time and attention that in needs. The Amsterdam Urbanite partners assess how to work in the next steps: further define and communicate data use case, plan conversations with school teachers to further define and develop the guest lectures about data commons in practice and develop a tool for data ecosystem mapping.

In Bilbao, as a result, of the SoPoLab2 three main challenges and opportunities for future work were identified: 1) Data in Urban Mobility, 2) Policies and 3) Cultural Shift. The main objective of this third session was to collect concrete proposals and actions that could lead to policies at local, regional and European or national level. Regarding to the three challenges that were identified in the previous SoPoLab, in order to collect concrete and specific projects/activities, policies or funding initiatives the above mentioned canvas was prepared. The outcomes obtained, splited in local, regional or European level and for each of the 3 topics are:

The data in Urban Mobility

Funding initiatives such as incentives for citizens to share their mobility data or incentivise private companies to provide their mobility data to look for delivery logistics patterns were mentioned, the integration of data management, standardisation of data in the technical specifications of public tenders of the city council was mentioned (local level). And the creation of a National Data Office was mentioned, in terms of policies (European level).

In terms of policy making, the creation of a department within the local institutions that could lead the management of the Data office as the only interlocutor with stakeholders was identified as a very needed action (local level). On the other hand, the creation of a blinding space that could coordinate the municipalities in order to facilitate the technological development of cities was identified a good practice that could be funded in terms of work. Also, the common mobility policies between the different institutions at a regional level should be regulated by law, so that all the institutions could have a common and shared framework. Identification of success stories or the best practices in the urban mobility policies boosting the electric mobility within the region that could be replicated in other municipalities was also mentioned and could be coordinated at a regional level and help very much the small municipalities in the region (regional level).

To increase the early and quality participation levels of the civil society in the urban mobility projects so the society increases the feeling of belonging and ownership of the project and assumes co-responsibility with the decisions made. Also, to improve the communication of the initiatives of urban mobility that the municipality launches. In terms of capacity building actions, an urgent need is training public servants in the use of disruptive technology based solutions, such as Urbanite platform (local level). And analyse the Higher Education Institutions (HEIs) academic offer in those topics and adapt it to the companies and administrations demands in Urban mobility (European level).

It is planned in Bilbao a very concrete roadmap and next actions. To present the outcomes of this third session and all the suggestion made by the stakeholders to the local policy makers, an end-using testing with public servants in a European level and leverage on the community built to keep on working on Urban mobility management and technology related issues. 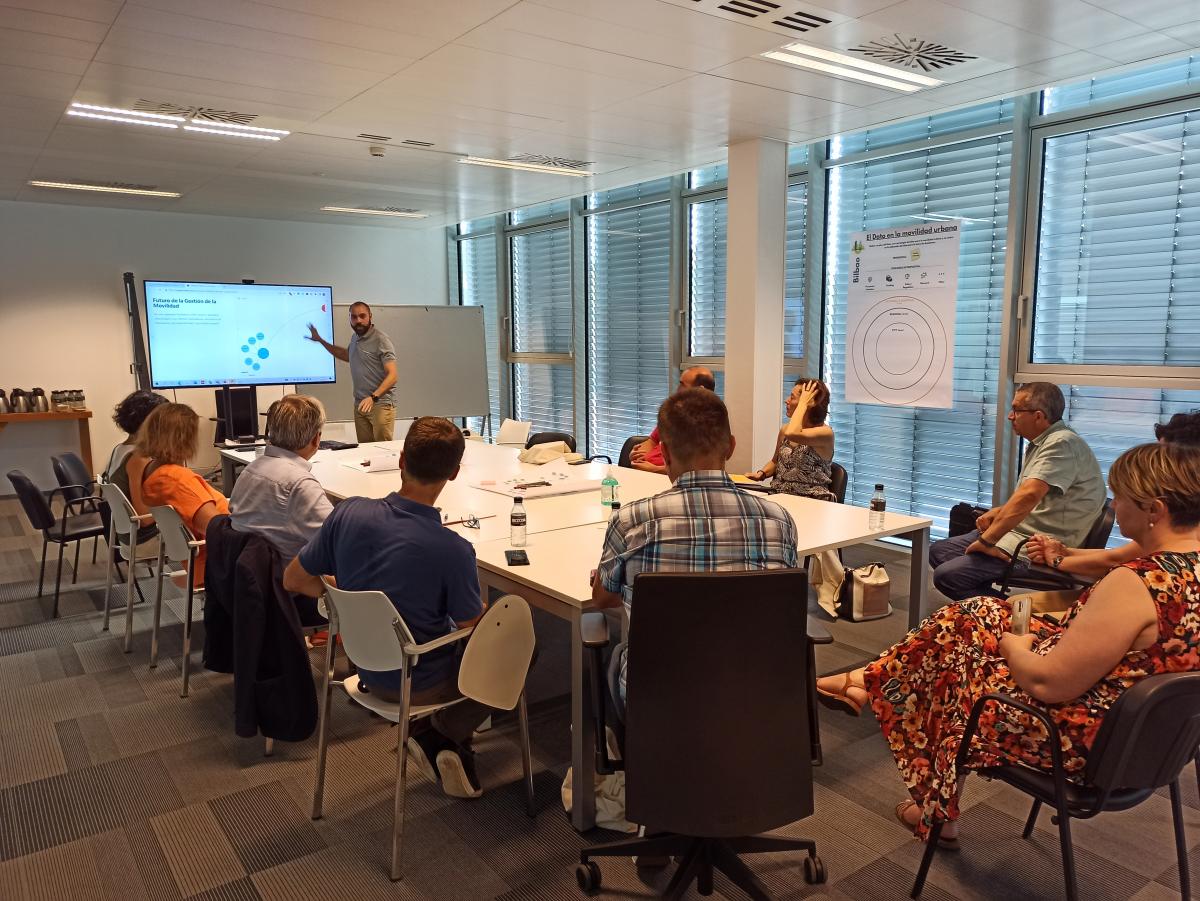 FVH, as Helsinki SoPoLab facilitator, has continued tight cooperation with the relevant stakeholders, in particular, concentrating in stakeholders working with traffic simulations. The target of the Second SoPoLab was to shed light on data platforms the participants use currently and how they experience their usage. And the target of the third SoPoLab was to discuss what kind of city we are planning with present traffic simulation models now and in the future. The workshop was targeted to stakeholders and entrepreneurs who are working with or developing traffic simulation models or interested in them. The city´s traffic planning should be “more radical” in or to put in practice politically agreed climate targets, the city does not have “radical tools” such as road tools to use because of political decision-making. Thus, the participants suggested that sustainably targets should be regulated by legislation that they were taken seriously enough.

For the next SoPoLab discussion between different stakeholders should continue diverse, and in ways that´s supporting different voices to raise. The simulation model will help to popularize how traffic simulation models function.           FVH will contact the regional and national government to open discussion on how the region could better reach sustainability goals, get the feedback and share it in the next European Level common SoPoLab with the rest of pilot cities.

In Messina, the second SoPoLab took place in the City Hall to discuss with local stakeholders about necessities and priorities for urban mobility management in Messina and how to make the SoPoLab concrete support for our policy makers. It was also defined the methodology to use for the co-creation policy-making strategies on the two key thematic areas (sustainable mobility and multi-modal transport) above till the third SoPoLab. The activity implementation strategy was organized in two phased:

The objectives of the third SoPoLab were focused on the identification of possible solutions to solve the problems that affect the urban mobility in Messina. To this aim, it was organized three panel sessions with some experts and opened discussion to the whole audience. Wanting to draw up a sort of “to-do list” of recommendation for decision makers that came out from the panels, outcomes can be summarized as follows:

For the future the aim is to investigate results more in detail and draft specific proposals for decision makers of the city municipality.

The next step is the organization of the last SoPoLab (the 4th in Messina), where the main challenges are to understand how the Urbanite technologies van support the Municipality to address the priorities identified in the panels organized during the third SoPoLab. Technologies will be part of the proposals that will be drafted and proposed to the decision makers of the Municipality of Messina and that will be also share with the rest of the partners in a European level discussion.

Even if it has to be share in a European Level SoPoLab the lessons that have been learned and the specific action that could be taken, there are some conclusions for each of the pilot cities that can be shared.

In Amsterdam, the goals of data collection and analysis and the objective for collection GPS traces about cycling trips should be better specified and further defined and the doubts about how democratic the data commons pilot currently is and how can be improved.

In Bilbao very concrete actions were suggested such as incentivizing private companies to provide their mobility data to look for logistic delivery patterns, the creation of a Department within the local institution, which could lead the management of the Data Office as the only interlocutor and increase the levels of early and quality participation of civil society in urban mobility projects, it would also increase the sense of ownership by civil society and therefore citizens would assume co-responsibility with the decisions taken. Finally, in Bilbao, it was suggested to train public officials in the use of disruptive technology-based solutions to improve their confidence in these decision-making tools (Local Level).

Finally, the conclusions obtained in Messina, were about the need on the part of the administration, to improve services but also to help educate citizens on sustainable urban mobility through awareness campaigns, events and other initiatives aimed at this end. Investment is needed in Messina to improve the traffic situation, with new infrastructure.

The objective of the European level session will be to gather insights and feedback from a European policy maker perspective related not only to the results of the local sessions, but also from the lessons learned on the use and testing of Urbanite platform for decision-making processes in urban mobility.